Generators have many uses. They can be used to support a camping setup if you’re using electricity at your camp site. They can also be used as a house backup when the power goes out; this is especially useful for extended outages that lasts for several days. Honda, in general, is known for its quality and low cost maintenance, particularly when it comes to their cars and lawnmowers. Honda propane generators are no different. Honda is consistently rated one of the best generator brands you can buy.

Here we compare the Honda EU2200i with other Honda generators of different sizes. Many of Honda’s generators are the inverter type. This means that unlike standard generators, which can cause power surges, inverters convert AC (alternating current) into DC (direct current) and then invert it back to AC. This ensures the current you’re receiving to your electronics and/or appliances is consistent and without power surges. Honda has even developed its own DVAR system on its strongest generator to deliver consistent power to your equipment or appliances.

The Honda EU2200i is a 2200 watt generator. It’s not powerful enough to power all of the appliances in a house, but it can do the necessities during a power outage. It may even be powerful enough to power a small campsite. It can power some appliances such as an energy star rated refrigerator, a microwave, portable fan, coffee maker, computer, and more. It runs quietly and weighs less than 47 lbs.

This Honda propane generator is 2200 watts, 18.3A, 120V. It can run 8.1 hours on .95 gal of gas. It is inverter generator, converting AC to DC and then inverting it back to AC to protect against power surges. It has a 121cc Honda GXR120 engine. It has a recoil starting system and a .95 gal capacity fuel tank. It carries a 3 year residential and commercial warranty.

You can parallel this generator with a 2nd same model generator or a EU2000iK1/T1 for 4400 watts of power. It has a fuel shutoff to run out the fuel that’s in the carburetor and then shuts off the engine, which provides extra safety when the generator is in storage. It also has an automatic oil alert system which shuts the engine off when there is low oil to make sure you’ll never burn up the engine. It also comes with an electronic circuit breaker on the generator.

How it Compares to other Honda Propane Generators

We picked a few other Honda propane generators available on the market to see how they compare. 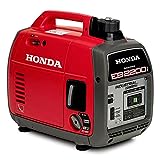 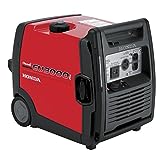 It runs quietly and can be run parallel with a second EU3000i for 6000 watts of power. This will allow you to run more appliances and electronics at once. However, the fuel tank capacity and fuel efficiency combined may not be as efficient as Honda's EG4000 generator.  It is equipped with the oil alert system to shut off the engine if the oil gets too low. It also comes with the 3 year residential and commercial warranty. 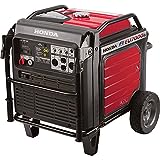 This Honda propane generator has some features that will make you think twice about buying anything else. For instance, this generator provides 5000 watts of power for 10 seconds that enables you to start up larger equipment. It is equipped with a Honda iGX commercial engine and can run for as long at 16 hours, depending on the load. It is an electric start generator, but has a recoil start backup. It can run 120V or 240V equipment.

This generator is also equipped with the iAVR Honda technology. This means this Honda propane generator provides a consistent flow of energy to all your appliances and electronics, no matter the load. It comes with a 6.2 gallon fuel tank and a 3 year residential and commercial warranty. Like other Honda generators, this one runs quiet for its size and is protected by the Honda oil alert system. Finally, it has electronic circuit breakers to protect it from being overloaded. 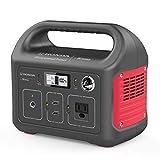 This Honda propane generator is built with Honda’s 270cc GX270 OHV engine. It’s protected with a full frame design. It can be switched from 120V to 240V support. It’s a quiet running generator that can run for up to 15.7 hours on its 6.3 gallon tank. This particular generator is also built with Honda’s DAVR technology. DAVR stands for Digital Automatic Voltage Regulator. It’s designed to hold the voltage stability within certain margins to keep consistent power.

It also comes with GFCI protection. GFCI stands for a ground-fault circuit interrupter and it protects you from being shocked with the device. It has electronic ignition and electronic circuit breakers to protect it from being overloaded. Like the other generators, it also has the Honda oil alert system which will shut the engine off and protect it if the oil gets too low. Although this generator can be used for either residential or commercial use, it was built with commercial use in mind. It comes with a 3 year commercial or residential warranty.

We gave the Honda propane generator EU2200i a total of 4 stars. It is not the best generator Honda has to offer, but it is still built with the same quality that Honda puts into its other generators. One of its best features is the fuel efficiency and the fact it can run parallel with another EU2200i to get twice the power so you can run more electronics and appliances. Of course a larger generator is going to be louder than the smaller one, but all of them still run quietly for generators.

The Honda EU2200i is probably best suited for a small campsite or for keeping the bare minimum running during a power outage, such as making sure your phone stays charged and the refrigerator stays running to keep your food from spoiling. It is nice that it doesn’t require much gas and can run for up to 8.1 hours on that slightly less than a gallon of gas.  This generator is light enough for most people to carry, which is another helpful feature.

However, even though it’s the cheapest of all the Honda propane generators in comparison, for less than twice the price, you can get 4000 Watts with a much more powerful engine to keep many more electronics and/or appliances running. While it’s possible to run two EU2200i’s parallel to get that power, you’d be spending twice the money and miss out on some of the important safety features of the larger generators. Not only that, but two parallel 2200i generators still equals only about two gallons of total fuel, while the 4000 Watt generator has a 6.3 gallon tank and can run for almost 16 hours. Likewise, you could buy two of the EU3000i Handi generators for 6000 watts of power, but the fuel efficiency and fuel tank size does not compare to the 4000 series.

Considering what Honda puts into the 4000 Watt generators, it makes little sense to buy two EU2200i generators unless it was absolutely necessary, such as for a small campsite use. Another possible reason to go with two of the smallest generators is the need to be able to carry them. All in all, the option you choose for which Honda generator you buy greatly depends on your needs.

No matter what your choice, you will be getting a high quality and safe generator. Honda is committed to delivering consistent electricity without surges and they’re committed to delivering it to you as safely as possible. No matter which generator you purchase, they all have engine protection that shuts off the generator if you get low on oil. All of them also come with the same 3 year commercial or residential warranty. No matter which generator you choose, you cannot go wrong buying a Honda propane generator with the high quality Honda engines.  It is good to know you will be making a purchase with a brand that can be trusted to bring power to your equipment reliably.

What Is the Best Way to Start a Fire in a Fireplace?
How to install a pellet stove
DeLonghi Space Heater Detailed Reviews
Keep Your Cool with the Best Energy-Efficient Air Conditioner
Are Electric Fireplaces Energy Efficient? (We Found The Answer)
Do Electric Fireplaces Give Off Heat? (Expert Answer)

Gas Fireplace Repair and Maintenance: Detailed Guideline
10 Best Propane Heater For Garage – Reviews For 2018
Best HVAC UV Lights For The Money – Reviews & Buying Guide 2018
Best Electric Fireplace Reviews Of Every Type: Buying Guide
What Size Should My Fireplace Grate Be?
3 Tips for Choosing the Perfect Fireplace Surround Design
This website uses cookies to ensure you get the best experience on our website. Learn more.